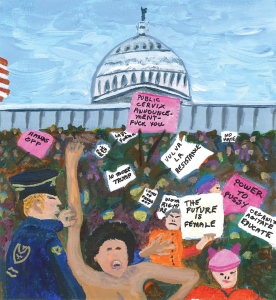 Abilene had been enjoying her later years concerned but not too distressed by problems such as climate change, the global spread of viruses, or politics. She focused on Reiki, healing, grief, mindfulness and compassion. The presidential election of 2016 lit a fire in her. Her great-grandmother perished in a death camp in World War II. She knew she had to make a contribution to women’s efforts at pushing back on some recent political changes, even though she dreaded moving out of her serene cocoon. Abilene lived in on beautiful tract of land in Oregon set by a river. Her husband had passed on, but he left her with an income adequate to her needs. She was free to meditate and create ceramics that she sold at fairs and festivals.

But with the direction the country was taking, she curbed her expenses and sent small checks to organizations she believed in, such as Planned Parenthood, Peace Action and the American Civil Liberties Union.

A phone call one morning changed everything. Abilene’s daughter Ruth had been married on the property five years before. For the event Abilene and Ruth went 50-50 on the purchase of a very large yurt for the wedding. Ruth had left the yurt behind when she and her husband moved to Chicago where they both had fellowships to continue their environmental studies.

“Mom, I got a call from the local resistance movement. They want to use the yurt to hold a fundraiser and also for their upcoming meetings.”

“Sure,” responded Abilene. “They will need a truck to transport it.”

“No Mom. They want to set it up on your property. It’s so beautiful and such a quiet setting by the river, that it will encourage people to come.”

After much hemming and hawing, Abilene agreed. From the experience of her great-grandmother, Abilene understood the importance of standing up and taking action.

Much to her surprise, Abilene realized she enjoyed these get-togethers and felt inspired by being around such committed energetic people. She also liked it when they left. It was just enough stimulation for her solitary nature.